Stop 1
The Heels of Carrick
On the Dundalk Road close to the roundabout Patrick Kavanagh penned here every time he visited Carrick. From here the
Church spire can be viewed sticking up like a paling post from the hill.

Stop 2
The Dale (Deal)
Outside the Valley Lodge Pub, O’Neill St
The street outside was the scene of the ass fair. Carrick has been a market town since the 15th century and different parts of the town served different needs. Donkeys and asses were sold mainly to dealers from Crossmaglen.

Stop 3
Dalin Men
In the Valley Lodge
There is an old saying which goes “From Carrickmacross to Crossmaglen there are more rogues than honest men” in “The Green Fool” Patrick quotes the famous lines written by a local priest about an incident that took place in Carrick on a Fair Day. A young innocent lad went into an eating house and was later arrested for being obstreperous. When he appeared before the Magistrates he claimed in his defence that someone put whiskey in his tea. Nearby is St. Joseph’s Church which was built in 1866. Inside there are beautiful Harry Clarke stained glass windows and the Stations of the Cross are by Richard King. On the left of the street there is a row of ornate stone cottages. St. Joseph’s Terrace (Weymouth Cottages). The “B” crest denotes Bath as Lord Bath, Viscount Weymouth, had these cottages build on his estate.

Stop 4
The Kicking Mare
Cross Lane
Kavanagh bought a horse in the Fair to pull the plough only to discover it was not suitable for the task. The Horse Fair took place on this side street. At the end of the street is “The Horse Hill” where the horses’ health was tested by running them up and down this steep hill.

Stop 5
Kavanagh’s Mare
Close by FBD premises in O’Neill Street
Here an auctioneer sold horses and Kavanagh sold on the mare he had bought in the Fair.

Stop 6
Mary Dooley’s Eating House
Outside Credit Union Building O’Neill St
On the Day the county folk had their favourite eating house where
they gathered for a meal. Walking through Main St on your left is ‘The
Shambles’ where butchering was and still is carried on.

Stop 7
The Hiring Fair
Corner of O’Neill St & Main St at AIB Bank
Young men and women hired themselves out as farm labourers and
servants. The men stood at this corner and the women stood outside the
Bank. Boys and girls as young as ten or twelve partook in the Hiring Fairs.

Stop 8
The Pork Market
Outside Wells & O’Carroll Office, Main St
The Pork market was located here and Carrick was famous for its pork. The
pigs were fed on the spent barley and wash from the local distillery and it
was claimed that this gave an added flavour and tenderness to the pork
and bacon. Patrick tells of a stroke he pulled on the dealers.

Stoop 9
Life and Death
Outside Markey’s Pub, Main St
Walking towards the Church of Ireland you pass the entrance to O’Duffy
Car Park, the site of the former Viscount Weymouth Grammar School (1711
to 1955) its past pupils contain many notable names. The students used to
hurl stones from the school quad over the roof of Markeys in an attempt
to hit the dial of the church clock. Continue down the Church Hill past the
Convent of St. Louis. This is the site of the castle erected in the 1620’s by
the Earl of Essex.

Stop 10
Shadows of Trent
On the Wall beside Convent Avenue Gate, Church Hill
William S. Trench was a land agent on the local estates before and
after the famine. He promoted assisted emigration and carried out
numerous evictions and as a result he was not well liked by the tenants.
He wrote ‘Realities of Irish Life’ to justify his actions. This poem is from
Kavanagh’s early works. Note: Just beyond the gate a local eccentric
carved snippets of history on the stone wall. These have been over
painted in black and white to highlight them. Return along Main St to
make your way to the next stop. 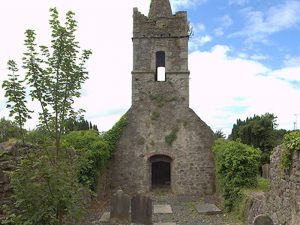 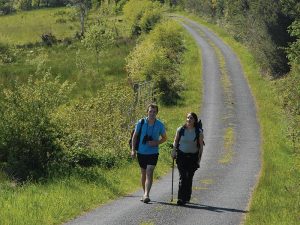 This self-guided trail takes visitors on a pleasant walk to several sites of historical significance in the town of Castleblayney and through Lough Muckno Leisure Park.

The Patrick Kavanagh Trail features local sites relevant to Kavanagh’s life and featured in his work as well as sites of general interest.

Guided heritage walking tours of Glaslough village are available every Friday and Saturday at 4pm during June, July and August.