The remains of St Daig’s monastery at Inniskeen are to be found in the church cemetery.

Overview
The remains of St Daig’s monastery at Inniskeen are to be found in the church cemetery. The first reference to the existence of a monastery here is 685 and the death of the last recorded monk took place in 1085. St Daig studied under St Ciaran at Clonmacnois and St Colmcille is said to have been present at the foundation and blessed the monastery.

There remains the stump of a Round Tower which is a National Monument. It is 12 metres high and constructed of hammered whinstone with a raised doorway 14 feet above the ground. The site was burned in 789.

Related Activities
A Norman Motte and Bailey is also in the vicinity. Known as Inniskeen Motte it is recorded in the Monaghan Inventory as follows: Motte and Bailey, Bawn, Large circular flat topped mound with fosse visible from SE-W-NE at abse. Traces of oval bailey extending E from Motte. Souterrain reported to exist in mound. Immediately NE of bailey is a rectangular enclosure with high stone walls and entrance through large arch. Foundations of gatehouse visible on inside. 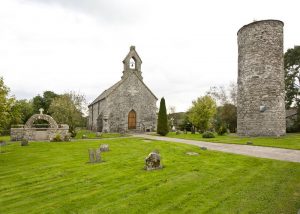