The picturesque 19th century mill village of Mullan is one of the few well-preserved examples of early rural industrial development in existence in Ireland.

Overview
The picturesque 19th century mill village of Mullan is one of the few well-preserved examples of early rural industrial development in existence in Ireland. Mullan derives its name from the Irish Muileann meaning ‘Mill’. The village contained a substantial flax mill and was at the centre of the linen industry in the 18th and early 19th century. Later, Mullan became known for the manufacture of Bullock Irish Serge. In the early part of the 20th century the mill fell into disuse and the villagelay idle until a shoe factory was established in 1924. The village was purchased by the Boylan family in 1944 and remained a busy and bustling rural centre until the late 1970s.

There are a number of interesting heritage features within the village, which include a mill-race (reputedly the longest in the country at 1km), a curved stone bench and a working water pump. The original structure of the village included the White Row, the Red Row, the Felt and the Dance Hall, a shop and school as well as the mill. A village competition was held every year for best garden, best vegetables and a field was kept in an allotment style for use communally by all the residents.

Mullan’s border location contributed greatly to its decline over the last quarter of a century and the village suffered a gradual reduction of population with most of the mill houses falling into disrepair and abandonment by the 1990s. Works are now underway to restore the mill houses and revive the village as a centre for the local community once more.

Location
Mullan village is located approximately 3 miles east of Emyvale, signposted from the Main Street. Emyvale is located on the N2 – the main Monaghan/Derry road. 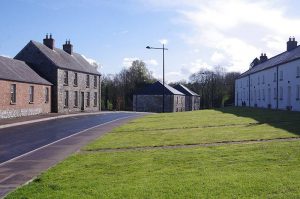 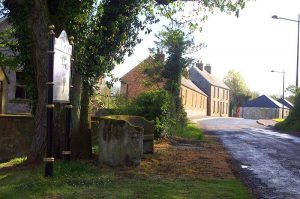