The Lady Ann Dawson Temple was designed by leading 18th Century architect James Wyatt who based it on the pantheon in Rome.

The Lady Ann Dawson Temple was designed by leading 18th Century architect James Wyatt who based it on the pantheon in Rome. Wyatt designed Castlecoole near Enniskillen and several other big country houses. He travelled Europe extensively and studied the great architectural heritage of all of those countries. His temple on Black Island, Dartrey, is one of two that he designed, based on the Roman original. However, the second one located at Oxford Street in London has since been demolished – leaving the Black Island temple as the only survivor.

The Lady Ann Dawson temple is of typical Palladian design with columns or pillars supporting a triangular abutment over the entrance. Moulding is of the dental design. The inner sanctum of the temple contains an alcove, which houses an altar on which is displayed a life size image of an angelic figure with outstretched hand reaching down to a man on bended knee holding a boy alongside him. The man has his hand stretched upwards almost touching the angel’s hand.
The interpreters of Wyatt’s creation recognise the angel figure as Ann Dawson reaching down to take her husband and son with her.

The figures are sculpted from Carrara marble and have been significantly vandalised. 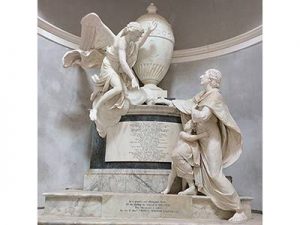 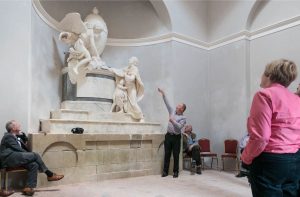