Built in 1841, Carrickmacross Workhouse has been restored into a Community Resource, Training and Heritage Centre by Farney Community Development Group Ltd.

Opening Hours for Tours and Visits:
Carrickmacross Workhouse is open for 45 minute tours at 11.30am and 2.30pm, Mondays to Fridays, all year - individual, family, group, school and bus tours are welcome. Saturday and Sunday guided tours available by appointment.

Brief Description:
Built in 1841, Carrickmacross Workhouse has been restored into a Community Resource, Training and Heritage Centre by Farney Community Development Group Ltd.

Detailed Description:
Carrickmacross Workhouse was one of 130 Workhouses built between 1841 and 1843 to house the poor, hence the Irish name of Teach na mBocht - The Poorhouse.

Then, for 4 consecutive years, 1845 to 1848, blight destroyed the potato harvest across Europe. Other crops, vegetables and animals continued to be exported, which resulted in The Great Hunger, An Gorta Mór.

Carrickmacross Workhouse was built to house 500, however by 1851, nearly 2,000 men, women and children were crammed into the building.

Due to the large numbers of children in Workhouses, many who were orphaned by The Great Hunger, between 1848 and 1850, 4,112 girls between the ages of 14 and 18 were emigrated from Irish Workhouses to Australia as wives and servants of the settlers and convicts there.

Carrickmacross Workhouse contains a restored original Girl’s Dormitory, from which 38 teenage girls were sent to Australia.

In addition, Mass Famine Graves can be viewed at the rear of the Workhouse site.

Carrickmacross Workhouse provides a Genealogy Service focused on families in South Co. Monaghan. Records include graveyards, surveys, revisit books, newspapers, etc.
There is a nominal charge for a Genealogy query, which can be submitted via the website:
www.carrickmacrossworkhouse.com/index.php/genealogy-queries 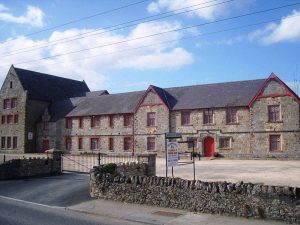 These chocolates are handmade in small batches using the best quality Belgian chocolate and the finest local cream and quality ingredients.