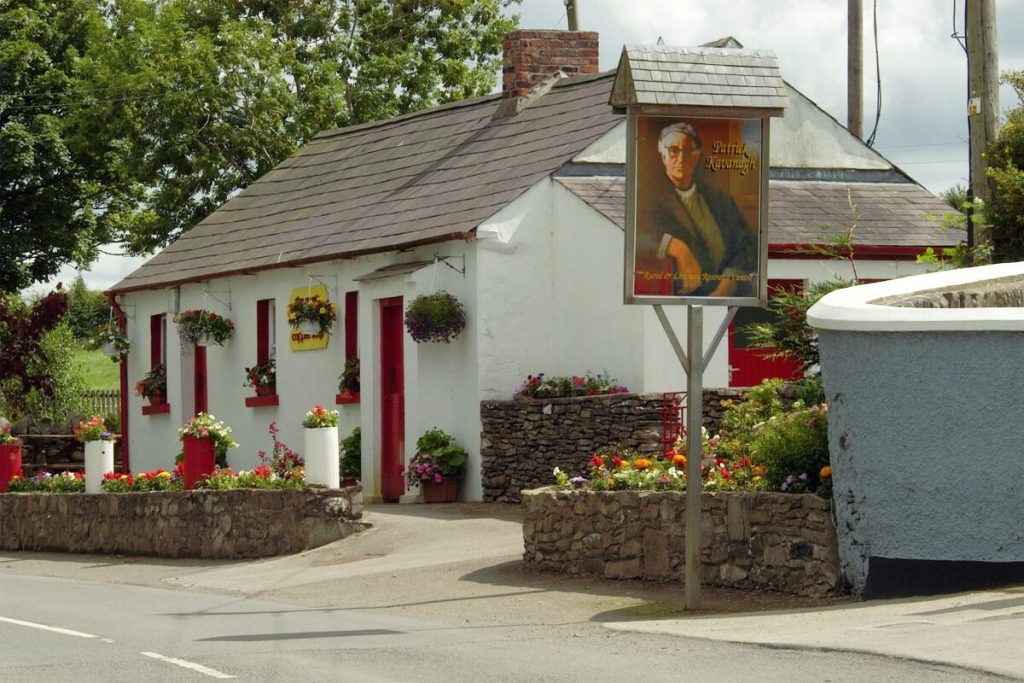 ‘The bicycles go by in twos and threes –

And there’s the half-talk code of mysteries

And the wink-and-elbow language of delight.’

In Ireland’s ancient East, the storyteller or bard was a man of great importance. None greater in a land that loves the word. And none was master of words like Patrick Kavanagh of Inniskeen, who told his stories of Irish country life – of tilling potato beds, secret flirtations, his love of the land – in the voice of the people he knew. In simple yet sublimely lyrical lines, his poems capture the beauty of the landscape and the richly colourful lives of those who inhabit it.

Come with us and follow in his oversize footsteps through his country. We begin in the church in whose yard he is buried, St Marys, now the Patrick Kavanagh Rural and Literary Resource Centre. Discover the essence of a poet who saw the beauty in ordinary things and, empowered with his vision, take the trail around Inniskeen, barely changed since his day.

Next stop is the ancient round tower that was once part of St Daig’s Monastery. Then pause by the railway bridge where Kavanagh watched his mother on her way to a second Mass. At Billy Brennan’s dance hall conjure up the images of country courtship conducted in that wink and elbow language of delight. Explore his black hills that look eternally to Armagh, Rocksavage Fort and the triangular field he tilled which took a lifetime to know. And from Slieve Gulllion View enjoy a spectacular panorama of the land where fabled mythological warrior Cúchullain roamed.

Visit the little school where he toiled in vain and the House of the Wake where Red Pat Jennings could tell to the minute when a person would die! Finish at the Kavanagh homestead where all those vivid stories were fermented in his youthful imagination.

And to show how the imagination runs deep in Ireland’s Ancient East, at nearby Deerpark you can journey back in time to see over a hundred examples of ancient rock art.